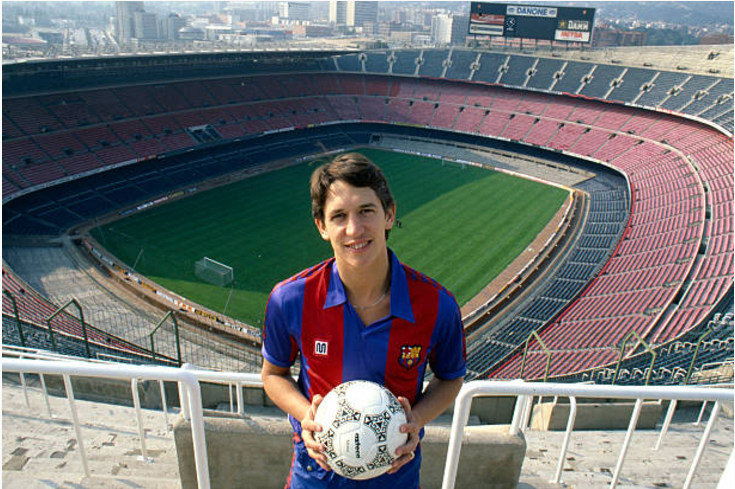 It is June 1988. Wet Wet Wet top the charts with a cover of The Beatles’ ‘With a Little Help from My Friends’, Ronald Reagan makes his third and final visit to the United Kingdom as president of the USA and the England national football team compete in the European Championships in West Germany.

Much like the present day, the Three Lions massively disappoint at the tournament and crash out in the group stages after losing all three games. But a quick look at their 20-man squad shows one difference – not all of the team play their club football in Britain. Glenn Hoddle and Mark Hateley ply their trade for AS Monaco, whilst star striker Gary Lineker fronts Barcelona’s attack. Chris Waddle, a Tottenham player at the time, would sign for Marseille just a year later.

In comparison, all 28 players in Gareth Southgate’s squad for the upcoming World Cup qualifiers against Malta and Slovakia are on the rosters of English clubs. Joe Hart spent last season on loan at Torino in Italy, but before that the last England squad player to be playing for a club in mainland Europe was David Beckham when he pulled on a Three Lions shirt whilst at AC Milan in 2009. Looking beyond the national team, there are actually only three Englishmen playing their club football in La Liga, the German Bundesliga, Serie A or Ligue 1 in the 2017/18 season – Reece Oxford (who is on loan at Borussia Monchengladbach from West Ham), Lazio’s Ravel Morrison and the lesser-known Kaylen Hinds, the London born striker who signed for Wolfsburg from Arsenal this summer following a loan spell at Stevenage in the second half of last season. Quite a career path at just 19 years old.

But why are so few players from this green and pleasant land moving abroad to play the beautiful game? The answer as to why there are no Englishmen playing for Europe’s top sides such as Barcelona, Real Madrid, Juventus or Bayern Munich is fairly simple. There just aren’t any Englishmen considered good enough to play for the world’s best like Becks or Michael Owen were when they moved to the Bernabéu in the early noughties.

Instead of the glamour names, it appears to be a different ‘group’ of Englishmen who have ventured overseas. They are the bad boys, the players with careers full of attitude problems and controversial incidents. They are the shame of the Premier League and Football League who have been shipped off of these isles. The likes of Joey Barton (Marseille – 2012-13), Jermaine Pennant (Real Zaragoza – 2009-10) and the aforementioned Ravel Morrison (Lazio – 2015-present). Ashley Cole, although the best English full-back of the modern era and holder of 107 national team caps, doesn’t have the best off the pitch reputation so can also be added to that list through a season at Roma.

There are two sides to why other English players stay in this country. Firstly, very few foreign teams actually want to buy English talent. Whilst Premier League clubs are often on the look out for Spanish, French or Italian flair, their La Liga or Ligue 1 counterparts aren’t keen on English players as they are generally more physical and tough, qualities that aren’t needed as much abroad as the focus is much more on technical ability.  A Spanish reporter summed it up perfectly in a 1958 issue of Charles Buchan’s Football Monthly magazine: “You [England] have some grand craftsmen, but the Spanish prefer artistes, of which you have only a dozen or so”. Nearly six decades on and it is still much the same.

Having said that, times are a-changin’. In English academies, there is now much more of an emphasis on technical ability and actually getting the ball on the floor and ‘playing’ football rather than a good old hoof or rough and tumble that youngsters ten years ago may have been more used to. As such, we may start to see a few more Englishmen take a leap across to English channel to continental Europe.

The German Bundesliga has already started the trend. Following the announcement of Reece Oxford’s move to Monchengladbach in June, journalist Rory Smith made a superb observation on Twitter. Click on the link to read the full thread, but it basically suggests that scouts always look for ‘undervalued markets’ and that German scouts have identified ‘young English players who don’t get enough game time in their own country but clearly have talent’ as such a market. There is evidence to back up Smith’s argument. In addition to the aforementioned Oxford (18 years old) and Hinds (19), Scotsman Oliver Burke (20) signed for Red Bull Leipzig last summer (he has since been brought back to Britain by West Brom), whilst Mandela Egbo (20) and Danny Collinge (19), both capped by England at Under-18 level, are at the youth academies of Borussia Monchengladbach and VfB Stuttgart respectively.

The second reason as to why we currently see very few English players abroad is due to the attitude of the footballers themselves. In general, the English as a nation aren’t all that enthused by the prospect of learning a foreign language, with very few children taught another language as they grow up in comparison to youngsters in Spain, France and Italy.  It’s hardly likely that footballers, given a somewhat unfair reputation for being ‘unintelligent’, would break that stereotype. Moreover, Michael Owen spent just a year at Real Madrid because he admitted that he and his family were not helped enough in Spain leading them to never feel settled and longing for a return to Blighty. It was therefore refreshing to see the attitude that Joe Hart approached his loan spell with Torino with last season. The 30-year-old took regular language lessons and described his time in the former Italian capital as “one of the greatest experiences of my life”. Micah Richards and Nathaniel Chalobah have also reportedly taken a promising stance towards life in Italy during recent loan moves to Fiorentina and Napoli respectively.

It is also regularly drummed into fans and players alike that the Premier League is ‘the best league in the world’. Whether you believe that to be true or not, if English players believe it then they are left thinking that it would be stupid to go elsewhere. It is indeed the most watched league in the world and what cannot be doubted is that there is more money in the English game than anywhere else. Even if you’re an Englishman playing for a mid-table Premier League club, the likelihood is you’ll be being paid much more than most, if not all, of the players at a mid-table La Liga club.

So that’s why very few English players play abroad, but in reality is it that much of an issue? As we near the 2018 World Cup, is success at major international tournaments a result of players moving away from their home country? Recent history suggests not. Of the 11 players that started the 2014 World Cup final for the victorious Germany, only Mesut Ozil (Arsenal) and Miroslav Klose (Lazio) played outside the Bundesliga. Four years earlier, all 11 of Spain’s starting XI in the final were La Liga based. Meanwhile, Italy’s entire 23 man squad played in Serie A when they lifted the World Cup in 2006. However, if you look at the squads of those three countries for the upcoming World Cup qualifiers, only Italy have really retained a core of players playing in their domestic league with just three of 25 players (12%) on the books of a foreign club. More Spanish and German players have moved abroad, but their national team squads still see percentages of 58% La Liga players and 62% of Bundesliga players respectively.

Of the other top European nations, in the squads of Belgium, Portugal and France there are more players at foreign clubs than in their home country. Indeed in Belgium’s case, only Matz Sels and Leander Dendoncker (both Anderlecht), neither of whom are first choice in the national team, play in the Jupiler Pro League. The reason for this is fairly obvious. The standard of the Belgian or Portuguese leagues just aren’t that high (both actually are behind the Russian Premier League in UEFA’s ranking) so it is only logical that players move abroad to test themselves in a better division. France though are the anomaly. Although not as prestigious as the Premier League or La Liga, Ligue 1 football is of a decent standard, yet 54% of the national team’s players ply their trade elsewhere. Hugo Lloris at Tottenham, Raphael Varane at Real Madrid, Paul Pogba at Manchester United and Antoine Griezmann at Atletico Madrid provide a spine to a team that reached the Euro 2016 final and are considered the most exciting team on the continent, yet none of them play in Ligue 1. In fact, of the 11 players in the current squad that are in the French top flight, only Steve Mandanda (Marseille) and Christophe Jallet (Nice) have above 10 national team caps. Shipping players out of L’Hexagone seems the way to go for Les Bleus.

In truth we’ll only ever see whether the English national side improves if more players do start to move abroad if it actually happens. Who knows, in ten years’ time maybe we’ll see Dele Alli at Barcelona and Marcus Rashford at Borussia Dortmund?!